Rust for the daily practitioner

How to use Rust to make video game prototypes

Join Nathan Stocks for a fast-paced, entertaining, curiously-informative, hands-on even deeper dive into the Rust programming language. This is the second course in the Ultimate Rust series following the Ultimate Rust Crash Course. If you like that course, you'll love this one!

This is a hands-on course! Not only are there targeted exercise for each topic discussed, there are also a series of project scenarios that walk you through using what you've learned to put together playable game prototypes that work on macOS, Linux, and Windows!  These projects will make use of Rusty Engine, a game engine developed specifically for this course to keep game engine concepts to a minimum so you can focus on using exactly what you learned in this course.

Rust is a systems programming language that eliminates entire classes of bugs and security vulnerabilities, has zero-cost abstractions like C and C++, is fun to program in, and lets systems programmers have nice things. No wonder Rust is gaining traction in spaces as diverse as game engines, high-performance computing, embedded devices, and web programming! Learn how to write high-performance code without the worry of crashes or security vulnerabilities. Join a vibrant community of developers where diversity, inclusion, and just plain being nice are all first-class objectives.

Jon
June 26, 2022
Excellent course! It has helped me to consolidate Rust’s main features (Closures, Iterators, Traits…) and connect the dots of RUST with a Game Engine as Bevy
Glen
June 25, 2022
Exercises were just almost trivial regurgitations of what was just presented. Challenges needed answers too.
Lee
June 19, 2022
Nathan is an amazing teacher, his lectures are clear and fun to watch. Please create more, like an advance course!
Walter
May 24, 2022
It is more intermediate concepts, nearly beginner ones. If you're already using Rust daily then I doubt you need it. But some comments on best practices are present for less advanced learners. From the description, I was hoping to learn more about Iterator impl. Experienced systems programmers, software developers, engineers, wizards.. Okay. But, warriors... I don't think so ;-) Thanks for the videos,
Dudu
May 10, 2022
I am really enjoying the course and he manages to keep my attention during the course which is a rare and valuable skill for an instructor.
Ivan
May 2, 2022
Good course to move for the developers who already use Rust but want to improve their skills. Initially, I graded it with 5 stars but later changed it to 4, because the latter part of the course is poorly designed - threading and channels are very briefly observed (actually no useful information at all for anyone who wrote a single more or less Rust program). I suppose that async development could be covered as well.
Robert
April 30, 2022
Great overview of intermediate concepts; clear and engaging presentation of concepts in an efficient manner. I would recommend.
Okan
April 29, 2022
Really enjoyed this course. I bought this instructor's other Rust code as well and started with that. Both are very good. His energy and knowledge made the course really enjoyable for me. I've been reading on Rust for a long time and been doing the rustlings exercises but these two courses took it to another level for me. Really appreciated the graphs when describing the inner workings of the Rust features.
Rohit
April 25, 2022
Excellent! I was looking forward to this course after completing the Ultimate Rust Crash Course and Nathan did not disappoint.
Ashfaque
April 24, 2022
Must be slower and with more examples... dedicated chapters on macros, annotations,mutex, atomic values etc. would help.
Johannes
March 13, 2022
Awesome course! The instructor put a lot of effort into the videos and has a very entertaining presentation style. Highly recommend!
Brad
March 5, 2022
Excellent course. Good length modules, explained well. Exercises are relevant, and structured in a way that makes them easy to follow.
Jonathan
March 1, 2022
This was a great addition to part 1. Covered a lot of topics in a short amount of time that were briefly discussed in part 1. Really great job. Highly recommend watching if you are new to Rust. Or if you are wanting to learn Rust basics quickly.
William
February 25, 2022
Really good explanation of concepts. I really like the exercises afterwards. Helps cement what is taught.
Jeff
January 20, 2022
Definitely picking up stuff I didn't learn in some other courses. I still felt like this was a beginner level course in a lot of ways though, not intermediate. One idea for training that I think would be great, is to open up a large project like RedoxOS, and go through it and find interesting things to explain. Real world projects offer up so much insight to the student. 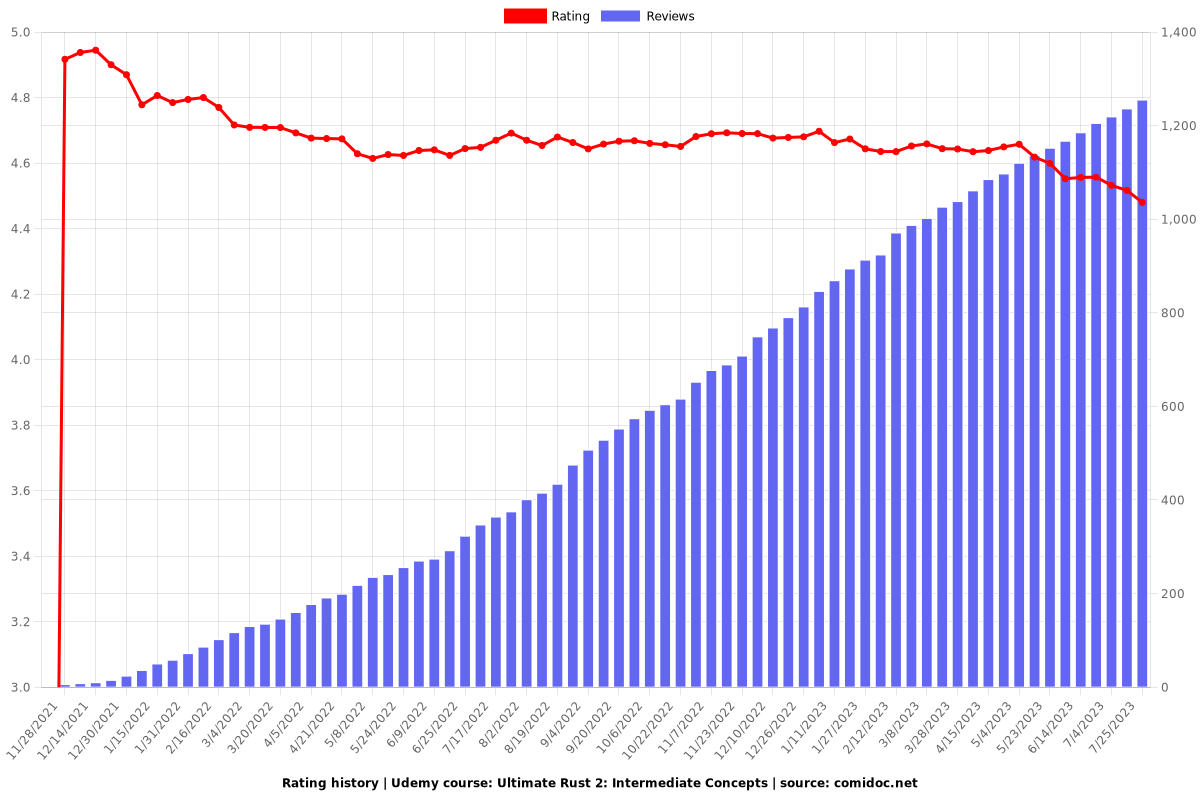 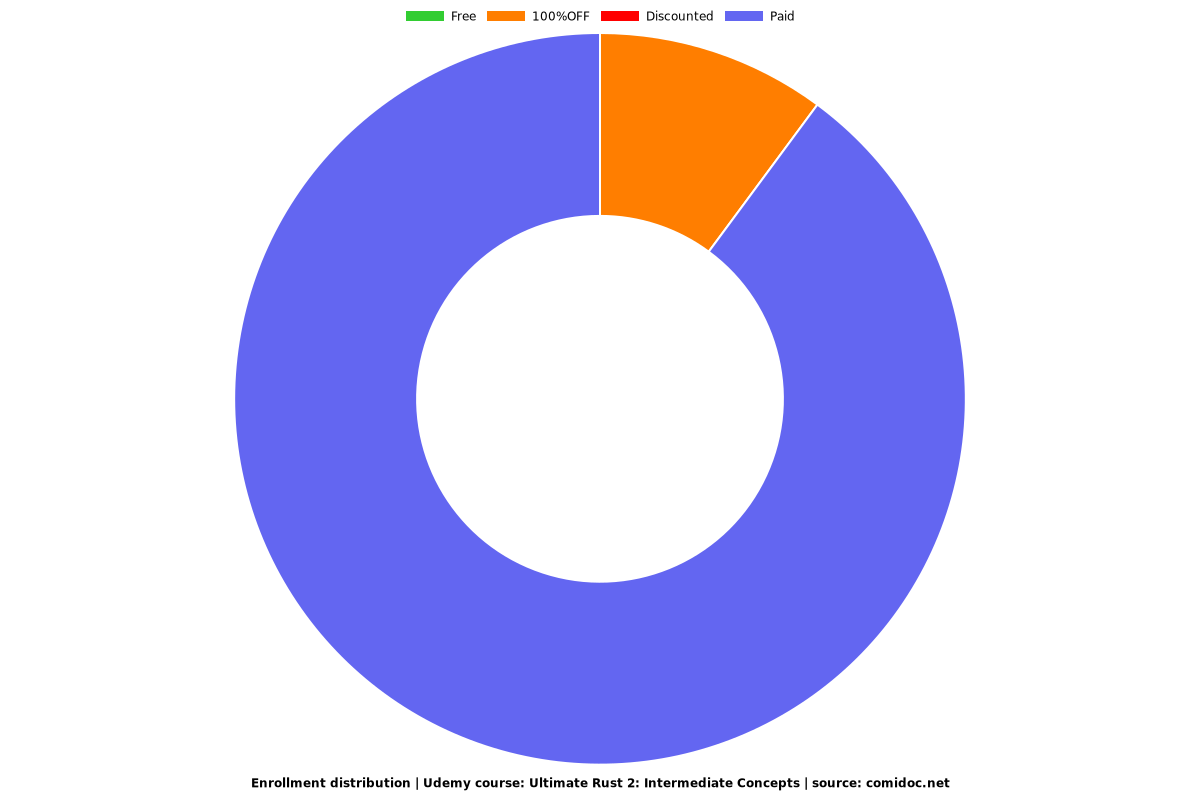